Although we never make any outrageous “10 MPH in one day” guarantees, if there was one showcase test that has the most potential for minor changes to lead to big results, it’s the exit velocity test. Here’s Will’s Day 1 progress with increasing his exit velocity. 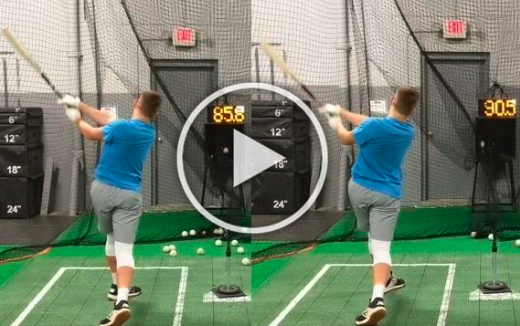 Here’s a critically important point with the exit velocity test: there is a difference between a good exit velocity test swing and a good game swing. You need to do whatever it takes to hit the highest number possible, and sometimes this means deviating from what would be an optimal swing in a game.

One important note once you get to the LOAD cues and beyond: do NOT go into showcase day trying these for the first time. We’ve found that these tips can have a profoundly positive impact for some and a negative (at least short-term) impact for others. The idea here is to experiment with these tips in the days and weeks leading up to showcase day to see how they affect you.

In a perfect world, you’d do these “mini-experiments” in the presence of a radar gun so you can objectively see if they are helping or hurting. If 1-2 of these tips have a bigger impact than others, scrap the rest and go into showcase day thinking solely about the tips that had the most positive impact.

1. Make Sure The Tee Is Not Too High So You Can Hit A Line Drive 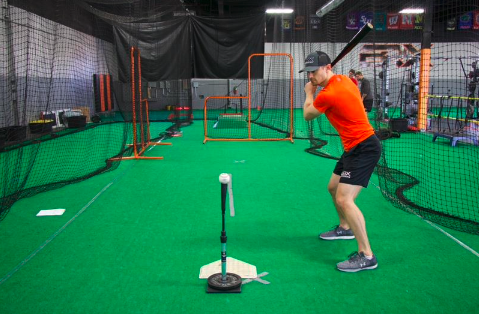 We’ve tested thousands of athletes at BRX, and one trend we’ve noticed to increasing exit velocity is that a lower tee and low line drive generally leads to the highest exit velocities. This is a great example of what we mean by a good exit velocity swing is not always the same as a good game swing: the ideal launch angle of a batted ball in the exit velocity test will be lower than in a game.

Above all else, make sure that you are not hitting the ball ABOVE wherever the radar gun is positioned – we’ve seen over and over again that this will considerably reduce ball velocity.

2. Don't Crowd The Tee! Get Far Enough Away From It! 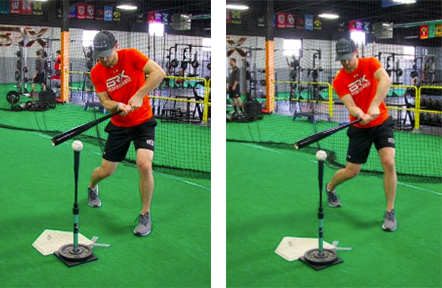 This prevents your arms from getting full extension and generally leads to flares to the opposite side of the infield – things that will absolutely kill your exit velocity.

Although it will feel weird at first, make sure you are far enough away from the tee – even if it means standing further away from home plate than you typically do in a game.

3. Stand Far Enough Behind The Tee 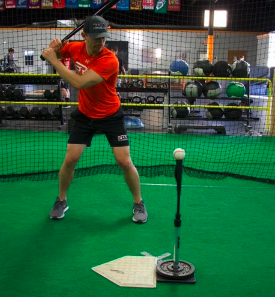 Building off the previous tip, one of the main ways to increase exit velocity is by moving your center of gravity forwards during your stride – even if you don’t typically do it in a real game.

To do this, you’ll want to stand far enough behind the tee (think closer to the catcher) to allow for a forward weight transfer.

You can also think about this as moving your body weight towards the pitcher during your stride. Training laterally and rotationally is a must if you want to see continued results.

Beyond allowing for a forward weight shift, standing further behind the tee will also give your arms more room to extend through the ball, something that’s helped our BRX athletes time and time again.

4. Swing As Hard As Possible!

So simple, but so effective.

If we were able to give ONE tip that had the biggest impact, this is it.

It’s amazing how infrequently athletes are actually swinging at 100% effort on the exit velocity test. What they think is 100% is actually more like 95%.

Here’s why: you generally are given 5-10 swings on the exit velocity test. Let’s say you go to a showcase where you’re given 8 swings. If you roll over 7 of them at 70 MPH but hit the crap out of one at 90 MPH, guess what number is going on your profile?

Literally, dozens of times we’ve told our athletes nothing more than to “swing out of your shoes” immediately before they set a personal record.

Leave nothing on the table on showcase day – swing as hard as you can!

5. Utilize A Leg Kick For Increased Hip And Shoulder Separation 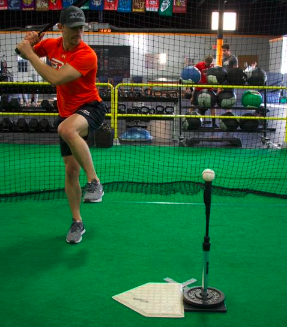 One thing you’ll want to experiment with is an extremely high leg kick during your load – even if you don’t typically do it during a game.

A leg kick generally allows you to do several things more optimally:

It’s not uncommon to see a 1-2 MPH bump if you’re able to utilize a leg kick effectively!

6. Cover Ground With Your Stride To Improve Weight Transfer 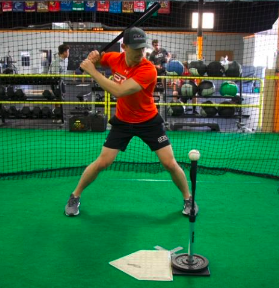 Although it can be tricky at first, something to experiment with is covering ground towards the pitcher with your center of gravity during your stride.

Imagine throwing a baseball under the following two circumstances:

Which of the two would you expect to see a higher velocity with?

Of course, you’d throw harder with a running start.

Think of swinging a bat in the same way: the more momentum you have before you swing, the more force and velocity you’ll create.

Of course, you’re not going to pull a Happy Gilmore and run-up to the tee, but in a small way, by covering ground with your stride, you’re going to increase how much force you can create.

7. Show The Knob Of The Bat To The Catcher's Feet 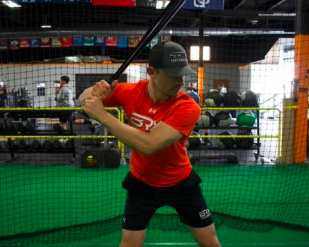 If there was one “golden” tip to increase exit velocity, this would be it.

Look up a slow-motion video of your favorite big league hitter where the camera angle is from the opposite batter’s box.

Every single one will turn the knob of the bat towards the catcher’s feet during the load. You can also envision this as 50% of what’s commonly referred to as a “bat wrap.”

Why does this work?

It’s kind of like how you need to load your body down before a vertical jump upwards.

By loading the hands/knob in the opposite direction of the ball coming at you, it increases the power you can display once you decide to swing forwards.

8. Load Your Hands Back To "Hide" Your Rear Elbow 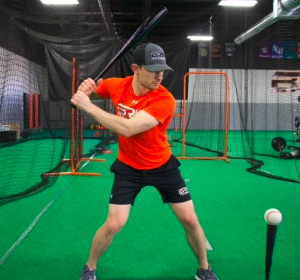 This tip goes hand-in-hand with the “knob to the catcher’s feet” cue.

This leads to a “push” swing as opposed to a “whippy” swing.

Although it’s a cue that feels extremely uncomfortable at first, it’s a non-negotiable if you want to increase exit velocity.

Here’s what you think about: If someone was watching you from the other batter’s box, you should try to “hide” your rear elbow from them by loading your hands far enough back so that they’re directly in front of them.

This ultimately brings your hands a few inches further from the pitcher during your load, which puts your arms in the correct slot to create an explosive swing.

This is definitely a more advanced tip, but something worth trying once you’ve experimented with the others.

For the same reasons that loading the knob of the bat towards the catcher’s feet works, loading the shoulder blade (or scap) backward during your load can increase the amount of force it can generate forward upon your swing.

10. Rotate Your Upper Back

Rotating your upper back is a classic example of a tip that shows there is a difference between a good game swing and a good exit velocity swing.

While many professional hitters rotate their upper back (think showing the numbers on your back to the pitcher), the truth is that it’s difficult to do it well on the field.

With that said, given that all of the variables are controlled when a ball is resting on a tee, it’s a great drill to try out on an exit velocity test.

Rotating the upper back away from an imaginary pitcher during your load will increase hip and shoulder separation – drastically increasing the torque you can generate, and as a result, velocity potential.

11. Throw Your Hands In The Direction Of The Pitcher

While rotating your upper back is half of the battle, if you aren’t careful, it can turn your swing into an excessively rotational swing, which leads to a lot of “spinning off the ball” or pull-side rollovers.

This is why it’s so critical to think about the swing as a “J” of sorts if you were looking from a birds-eye view of your swing.

The load of your shoulders creates the hook at the bottom, while the swing of your hands creates a straight line forward towards the pitcher.

We like telling our athletes to think about turning their shoulders away from the pitcher during the load and then throwing their hands at the pitcher – not shortstop – during the actual swing. 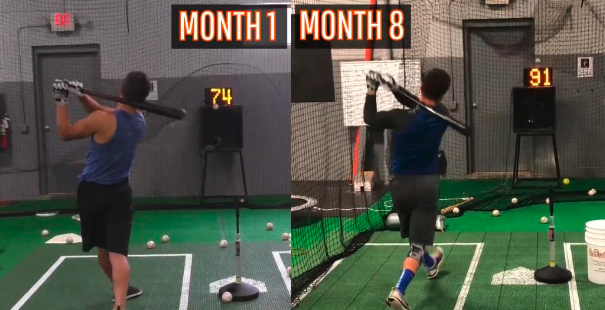 Are you serious about increasing your exit velocity? If so, check out our Top 5 Workouts To Increase Your Exit Velocity. Many athletes have taken advantage of this FREE offer and have seen tremendous results.

BRX is about finding your baseball potential from deep within that no one else sees besides...
Read this article

Infielding The infielding portion of a showcase is where strategy plays a critical role.
Read this article

OUTFIELDING Just like our advice for infielders, the outfielding portion of a showcase is where...
Read this article