The infielding portion of a showcase is where strategy plays a critical role.

Most baseball players don’t realize that they need to be focusing on showing off different elements of their game with different throws.

This guide will go into further detail on the strategy mentioned above and some tips and tricks for dominating the infield portion of a showcase.

1. Mental Approach For Throws 1 & 2: Throw As Hard As Possible

We’re firm believers that most infielders under-shoot their actual throwing velocity by 2-3 MPH on showcase day simply because they’re trying to do the following all at the same time:

Ever heard of the phrase “He who chases two rabbits catches neither?”

By focusing on all three at the same time, you do none of them optimally.

Here’s the point: focus on ONE of the three elements at a time so you can show a college coach in attendance or looking at your online profile everything you have to offer.

This brings us to our first tip: throw as hard as freaking possible! Let it rip!

Worried about overthrowing the first baseman? Don’t be.

Nearly all showcases that record video rarely ever have the camera pan to first base to follow an infielder's throw. An infielder could overthrow the first baseman by 20 feet, but their online profile would reflect that number if it was their highest throwing velocity.

Obviously, in a perfect world, you’re able to throw as hard as possible and hit the target in the chest, but the point is this: for your first two throws, throw as hard as you possibly can. Of course, don’t crow-hop like an outfielder (that wouldn’t look very good to a coach watching your film).

Here is your ultimate mindset: throw as hard as possible while still approaching and throwing the ball like an infielder would throw in a game.

2. Mental Approach For Throws 3 And Beyond: "Actions" and Smoothness

Now that you’ve thrown a couple all-out, it’s time to make a complete shift in focus to what coaches and scouts refer to as “actions.”

“Actions” is a term that encompasses smoothness, quick transfer/release, fluidity, athleticism, etc. Think of this as the “eye test.”

Due to the fact that the infield velocity is your best throw and not an average of all of your throws, throwing as hard as possible is no longer your ultimate concern.

Several of the tips and tricks discussed in the rest of this guide will go over how to improve your “actions.” With that said, it’s nearly impossible to explain optimal infield actions without video demos. If you haven’t already upgraded to the BRX Showcase Secrets Course to get video tutorials of everything listed in this entire guide, we highly encourage you to do so! 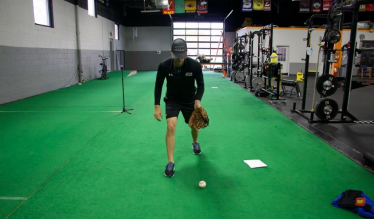 Common mistake infielders make bringing their body to a complete stop when they receive the ground ball. They’ll bring their feet even with each other, losing all momentum in the process.

Having your right leg forward when you begin bringing your torso down toward the ground to receive the ball allows you to do several things:

We’ll get into further detail with the points above a little later on.

Above all else: make sure you do not come to a complete stop when you field the ball. This will lead to poor grading from coaches/scouts in attendance or looking at your profile online.

4. Once The Ball Is In Your Glove, Drive Your Right Leg Through The Ground 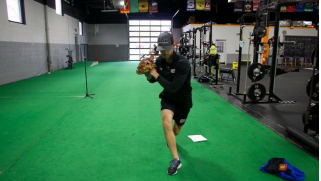 For reasons discussed several times throughout this guide, the faster your body moves when you throw the baseball, the higher the velocity will be.

For infielders, this process starts with the right leg exploding through the ground to help your body cover as much ground towards first base as possible when you get out of your “receiving” position.

5. Transfer Your Glove From The Ground To Your Chest As Quickly As Possible 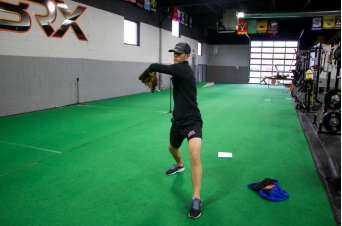 This is one of the “actions” that coaches are looking for.

When a coach says an athlete has a quick transfer and release, this is the process that they’re referring to:

Your goal is to do this process as quickly as possible, and it starts with the time between numbers 1 and 2. Think about explosively and quickly bringing the glove from the ground to your chest in as little time as possible.

6. Get As Much Momentum Towards First Base As Possible

This is a tip that is most relevant for throws 1 and 2 when you’re trying to throw as hard as possible.

Getting momentum is an art and requires some practice. You essentially want to get your body moving as fast as possible towards first base without crow-hopping.

If it means one extra shuffle that you would typically make in a game, it’s totally okay for your first two throws. There will be a time and place for getting rid of the ball quickly, and the first two throws are not it. 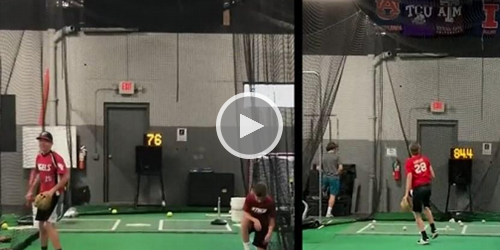 Tags: Baseball Showcase
Back to Blog

60-YARD DASH Although improving a 60-yard dash takes time, there are some useful tactics that can...
Read More

OUTFIELDING Just like our advice for infielders, the outfielding portion of a showcase is where...
Read More